Most people that visit Iceland are stunned to discover the amount of waterfalls it has. I have even heard a person say that Iceland has „too many“ waterfalls. Is that even a thing? In my opinion you can never have to many waterfalls. It’s just a matter of narrowing down which you should visit, and that’s where our expertise comes in handy. Iceland has many waterfalls that have become quite famous. You might for example have heard off Gullfoss, Seljalandsfoss or Skogarfoss? Although these waterfalls are amazing and absolutely worth visiting, we also want to tell you about the lesser- known waterfalls that are just as beautiful. That way you can build up your itinerary by including destinations that you might not have heard off, and mostly locals know about!

Let‘s start with one of my absolute favorite waterfalls, Kvernufoss. Not many know of this incredible waterfall, but to be fair it is relatively hidden. This stunning waterfall is 30 meters high (98 ft) located in a gorge in South Iceland. You will have to hike for about 20 minutes. But believe me when I say that is more than worth it and you will not regret it. The best part about Kvernufoss is that you can actually walk behind it and enjoy the true peacefulness of the waterfall.

The secluded beauty of East Iceland is only just beginning to be discovered by visitors. East Iceland offers you the opportunity to truly experience the tranquility of nature. The magnificent Klifbrekkufossar fall is located near Egilsstadir town. The waterfall is 90 meters high (295 ft), with seven tiers in a stair-step pattern originating from the spring- fed river,  Fjardara.  There is one downside to Klifbrekkufossar and that is that you can only reach it during summer (June – September), but that makes it all the more special.

Dynjandi (the name means “thunderous” in Icelandic) is easily one of the most spectacular waterfalls in Iceland. It is a “must- see” when you are traveling in the remote West fjords. For many locals it is Iceland’s most majestic waterfall in Iceland, and it is known as the jewel of the West Fjords. This powerful waterfall drops 100 meters (329 ft) off the edge of a mountain resembling a tiered wedding cake. Interestingly, Dynjandi is actually a series of seven tiered waterfalls, each one with its own name. You can even walk up to and behind the third waterfall, Gongufoss. It is very easy to reach Dynjandi from the road, and you will only have to hike for about 15 minutes. During the hike, you can view several smaller waterfalls leading up to Dynjandi itself. No matter how many times i visit Dynjandi, it leaves me lost for words each time.

Glymur is Iceland‘s second highest waterfall and it is located in Hvalfjordur or “Whale Fjord“. The waterfall descends gracefully in steaming ribbons down 200 meters (658 ft) into a massive canyon covered with vivid green moss. An ancient folk story says that a mythical whale once swam up the waterfall to reach the lake at the top. The weirdest thing about this story is that whale bones have actually been found in the lake! Finding Glymur is not hard, but to reach it you will have to embark on a slightly challenging but adventurous 4-hour hike on marked trails. One scenic trail takes hikers up to the waterfall, across a river down from the other side. If you are not up for it, I recommend that you instead hike up to one of the viewing points on the way and return the same way.

Good to know before hiking up to Glymur

Keep in mind that you will need to walk through the river using a primitive bridge made of logs and rocks placed directly in the water. A system of hand ropes helps you to keep your balance as you cross.  Be prepared to get wet and dirty and make sure you are dressed according to weather and have good shoes and water. It’s a good idea to bring a pair of wading shoes to use for river crossings. The best time to hike the area is in the summer. The trails can be slippery during the spring, fall and winter. The log bridge is also removed once the summer is over. And don‘t worry if your water flask runs out during your hike; you can get more fresh, clean water from the river along the way!

Are you planning to explore the famous Golden Circle but you are also looking to see something off the beaten tourist track? If that is the case then you should add Thorufoss to the itinerary. Thorufoss is a stunning waterfall close to Thingvellir and is 18m (62 ft). The best part of this waterfall is that you will most likely be alone when you visit. So, it’s great for both enjoying a peaceful moment in nature and for taking great photographs. Thorufoss is also one of the filming sites in the popular series Game of Thrones.  This was a scene from  Season Four when Drogon the black dragon met an unlucky farm goat for dinner.

Faradagafoss is situated in a gorge about 6 km from the town Egilsstadir in the East. A marked path from the parking spot leads up to the waterfall, an easy 30 – 45 minute walk. You can go down into the ravine and behind the waterfall. Make sure to be careful and hold on to the chain that has been embedded into the rock. A legend tells us that the cave is a good spot to make a wish. Another folktale claims that a female troll used to live in the cave with her pot of gold.  The hike up to the waterfall will take about 30 minutes from the parking lot.  Along the way you can enjoy the beautiful gorge and views over the whole valley.

Gluggafoss is the most famous of a series of waterfalls running in the river Merkja in Fljotshlid, approximately from the town of Hvolsvollur in the South of Iceland. The name of the waterfall literally means “Window waterfall” and derives its name from the gap or “window” it has made in the cliff it falls down on. The cliff is palagonite or tuff rock which is quite soft and therefore the rock formation can be easily abraded. In the 1940s the waterfall looked totally different than it does today, you could hardly see the top of the waterfall and it had three gaps or “windows”. It also took further changes after the 1947 eruption in Hekla volcano, as the 20 cm thick as layer that was carried downstream by the river helped abrading the rocks. Gluggafoss is a protected nature reserve. 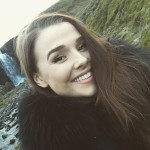 Vilborg loves to talk about Iceland and has lived her whole life in country. She loves nothing more than traveling, eating chocolate and spending time with family and friends... in that order.

Secrets of the Summer Solstice