Do you like caving? Are you into spelunking? Going underground in Iceland offers many great opportunities to explore the hidden landscapes beneath our feet. Check out these great caves in Iceland.

As the world learned in 2010 with the eruption of Eyjafjallajokull, the volcano that stopped air traffic across northern Europe for six days, Iceland is a volcanically active island. The birth of the island began with multiple volcanic eruptions under the sea, at a so-called “hot spot,” whose magma built up over time to create the island. Iceland’s oldest rock is around 16 million years old, which is not very old in geological terms. In fact, all rock-like matter in Iceland is in fact lava rock, although with time (lots of time) that rock transforms into other rock forms such as basalt.

Even if you aren’t a geology or volcanology geek, while in Iceland, it‘s quite interesting to get up close and personal with this abundance of lava and many travelers here go on cave exploration tours for that purpose. (Pro tip: it’s also a great option for a rainy, snowy or windy days in Iceland). There is a multitude of lava caves here in Iceland and the island is in fact a speleologist’s paradise, as only a fraction of the hundreds of caves here, have been discovered and explored.

Most of Iceland‘s lava caves are lava tubes created by molten lava flowing underneath the hardened surface of a lava flow, much like a river finding a new passage. When the eruption ceases, the flow stops and leaves behind a long tunnel or cave.

But which lava cave to visit?  First, we always recommend going on guided caving tours where you’re provided with helmets, headlights, and  a guide to explain what you’re seeing as well as ensuring your safety and the preservation of the natural caves. The lava formations in the caves, such as stalactites and stalagmites, are very fragile so you must tread carefully and with respect.

Here are a few of our favorite caves, which happen to be not very far from Reykjavik:

Close to Reykjavik, you’ll find in the Tvibollahraun lava field a cave called Leidarendi.  It hasn’t been manipulated in any way so it’s still very natural, with beautiful vibrant colors and an interesting history.  Although you must wear good hiking shoes, be fairly sure-footed and prepared to hunch down in some places. It’s not a difficult walk through the approx. 900-meter circular red tube but it’s a good adventure, even for us who are a little bit claustrophobic! Interested in exploring Leidarendi cave? Then check out our tour here.

Another cave that is located only a short distance from Reykjavik and therefore ideal for a 2-3 hour tour is the Raufarholshellir, a large and airy cave, which features beautiful and varied lava formations.  It is approximately 1300 m long, wide and tall.  It has recently been made easier to access with platforms for walking and lighting to further enhance the experience.  I’d explored the cave before these changes – and although I’m generally against human intervention in nature – they’ve done a beautiful job and have respected the natural setting. The cave is now accessible to all and one can really appreciate its grandeur. Adding to the experience, our guide was knowledgeable and relayed lots of interesting and fun facts. We have a standard tour but, if however, you prefer a more challenging cave exploration you can join their Extreme Lava Tunnel Tour go all the way to the end of the lava tunnel.

Perhaps the most exciting and awe-inspiring caves in the vicinity of Reykjavik is the Thrihnjukagigur Cave, which is actually an ancient volcano that you descend into through its crater and sink down 120m/400 ft. via an open elevator system. This excursion is probably not for any acrophobes and you should be in reasonably good shape as it‘s a 50 min hike to the volcano and back.  However, it is definitely a once in a lifetime experience and is now on many international lists of “must see places before you die.“   And if you‘re either too lazy to walk or have some other legitimate excuse, you can always take the helicopter tour and skip the walking part altogether! Interested in descending inside a volcano? Learn more here.

Heading northwest from the capital, you come to the beautiful Borgarfjordur region, which is a real gem with beautiful scenery and noticeably less traffic than the very popular Golden Circle and South Iceland.

By the gorgeous Husafell nature reserve in a 1100 year old lava field you‘ll find Iceland‘s largest cave Vidgelmir. The cave is really expansive and now with the new walkways and lighting, it’s easy to navigate as well. There are two different organized tours to choose from, the Cave Explorer, a 1 ½ hr. tour, which is family friendly, and the Cave Master, which is 3-hrs. and allows you a more “in depth” exploration of the cave. If you‘re headed that way, I definitely recommend adding a visit to the cave to make your day perfect.  There are also some great day tours out of Reykjavik that include the cave as well as the main highlights of the Borgarfjordur region, such as the Deildartunguhver hot spring and Hraunfossar waterfalls. Take a guided walk into the mighty Vidgelmir lava cave and relax at the geothermal pool at Husafell.

If we go a little further afield, we find on the Snaefellsnes peninsula, the amazing Vatnshellir cave.   There you can literally descend into the bowels of the earth like the travelers in Jules Verne’s book “Journey to the Centre of the Earth“ did a 150 years ago, though if we are nitpicking, they actually went down through the nearby Snaefellsjokull volcano.  The cave allows for easy access and doesn’t take up too much of your day’s adventures but is really worth the visit. Departures are offered on the hour from 10:00-18:00 in the summertime with fewer departures in winter. Check out our tour to Vatnshellir cave here.

You may think that once you’ve seen one lava cave you’ve seen them all, but that is certainly not  the case.  The lava caves of Iceland are a magical world underneath our feet, each one with their own secrets and treasures waiting for us to discover and enjoy.  So go ahead, book one, two, three or more lava caving tours while you‘re here!

Pro tips: Good hiking shoes are always recommended for caving tours as well as warm clothes as the temperature is usually only around 2-3°C/35-36°F inside the caves. 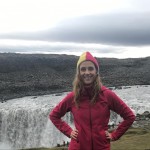 Solveig is a licenced tour guide and loves nothing more than to roam the highlands of Iceland in the summertime, camp, hike and practice yoga. During winter she would love to travel the rest of the world but when it’s not possible she likes to read, watch sci-fi movies, paint and of course spend time with her girls, cat and husband. Solveig’s favorite spots in Iceland are many but among those are the highlands around Askja in North East Iceland, the Skaftafell National Park and Thórsmork nature reserve.

A Day in Snaefellsnes Peninsula